What is the project about

More than one third of the Adriatic coast in Albania is being eroded - at a rate of one to two meters per year - accelerated by removing gravel and sand from beaches for construction industry, uncontrolled construction along the coast, deforestation of large coastal areas (even inside protected areas), and agricultural development. Increased migration to coastal areas has resulted in uncontrolled harvest of coastal and marine resources (‘Protected Areas gap assessment, marine biodiversity, and legislation, UNDP 2010’)

Overfishing along the entire marine stretch has led to the depletion of breeding grounds of Sparidae, Soleidae, Mullidae and more. Foreign offshore fishing has depleted stocks, especially of fish, mollusks and crustaceans (‘Marine Protected Area Report, UNDP 2009’)
Bivalves and crustaceans have been collected illegally. Divers have illegally extracted the bivalve mollusk in a way that damages entire coastal rocks. Marine vertebrates such as sea turtle (Caretta caretta), dolphins, sharks and otter (Lutra lutra) are trapped in fishing nets, and in most of the cases are killed instead of being released.

Uncontrolled hunting is another major form of disturbance to biodiversity, especially in the winter months when migratory birds are at risk

Pollution of marine and coastal waters is increasing, especially in lagoons. Most pollution comes from urban and industrial waste, sewage, and chemicals used in agriculture (‘Analysis of the proposed potential areas as Marine Protected Areas in Albania, UNDP 2009’)

The impact of climate change is seen in: rising sea levels, changing ecosystems in lagoons, increased frequency and intensity of floods, introduction of alien and invasive species from warmer regions, and a decrease in some marine and coastal populations of fish and invertebrates.

Potential threats include extraction of sand from the bottom of the sea, plans for drilling and possible oil exploitation along the coast, and invasive species.

UNDP and the Global Environment Facility support the Government’s plans to double Marine Protected Areas, and improve their overall management. In close cooperation with national partners, this includes:

What have we accomplished so far 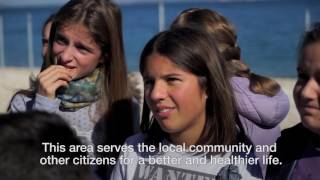